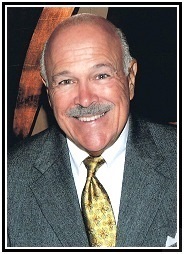 Trained as an aerospace engineer (MS, Caltech), Mr. Martin started his career as a propulsion scientist, but ended it on the business side, running companies and consulting for companies big (GE) and small. He has over 30 years of experience, has been an advisor to government agencies (domestic and foreign), and did some of the pioneering work in the U.S. on high-power satellite television systems (like DirecTV) and high-definition television (HDTV).

In this paper, Hughes, which has built over 100 earth and inter-planetary satellites, acknowledged Mr. Martin's research contributions in the pioneering field of rotating fluid dynamics in his investigations of the effect of fuel slosh on the stability of a satellite. In 1983 he co-authored the space industry's Position Paper on the U.S.'s Capabilities on Liquid Rocket Propulsion (if this PDF does not display, it was downloaded). Over the next 3 years he wrote seminal publications on satellite television systems and HDTV (see publications below), and was being quoted in London's Financial Times. And 10 years later he was running a $36 million jet-engine business.

ConsultResearch Companies, 1998-2021
Mr. Martin founded ConsultResearch after retiring from 30 years in the satellite and jet engine businesses. Initial focus was on providing engineering, computer and business consulting to high-technology companies, but it was later expanded to include Internet services, export of high-tech gear, and design and construction of safe rooms in residences.

Amtec Companies, 1987-1998, Executive Vice President
Acted as Chief Operating Officer of these $36 million jet engine and jet engine parts companies, with responsibility for such departments as sales, accounting and engineering. Also acted as CFO, inside counsel (contracts, litigation) and CIO (computers, networks and databases), and led many of the negotiations resulting in the sale of the companies to the second largest firm in Sweden.

Murrays Auto Supply & Sav-on Auto Supply, 1961-1965
Before college Mr. Martin rose to head the Speed Equipment Department of Murrays, the largest in Miami, FL. He left to run Sav-on, and expanded the speed equipment business to modifying cars for racing. Although running the business was his main task, he contributed to the speed modifications and often tested his ideas on the race track.

Was Teaching Assistant at Caltech

Chaired committees advising the U.S. government, including the State Department

An Evaluation of Our National Capability" (if this PDF does not display, it was downloaded)

Memberships (past & present): American Institute of Aeronautics and Astronautics (AIAA), Institute of Electrical and Electronics Engineers (IEEE), American Society of Mechanical Engineers (ASME), Society of Automotive Engineers (SAE), American Association of University Professors (AAUP). As a member of AIAA's Technical Committee on Space Systems, Mr. Martin co-authored AIAA's 1983 Position Paper "Liquid Rocket Propulsion: An Evaluation of Our National Capability" (if this PDF does not display, it was downloaded).

Publications: A sampling is presented below, ranging from the dynamic stability of satellites, to profit-seeking techniques for direct broadcast satellite systems, to high-definition television. A more detailed list may be found here.

"Experimental Investigations on the Fuel Slosh of Dual-Spin Spacecraft" (if this PDF does not display, it was downloaded), COMSAT Technical Review, Volume 1, Number 1, Fall 1971. Similar paper presented at the AIAA Guidance, Control and Flight Mechanics Conference, Hofstra University, Hempstead, NY, August 1971 and available from AIAA here.

Interests (Architecture and Flying): Mr. Martin has had a 40-year interest in architecture, has designed and supervised the construction of three residences, and has developed breakthrough concepts for safe rooms. He owned and flew three twin-engined Cessna 337 Skymaster aircraft over a 22-year period ending in 2021, including a round-trip from Miami to Boise, Idaho, but his most frequent flights were over Caribbean waters, where he once had to ditch his airplane when both engines quit (news coverage here). He has been an advisor to Cessna on Supplemental Inspection Documents (SIDs), is a webmaster of the Skymaster Owners and Pilots Association (www.337skymaster.com) and hosts a separate website (www.SkymasterUS.com) covering such technical topics as fuel management.

DBS and HDTV: Headed the systems engineering team that in 1981 designed the first DBS TV system for the U.S. (many of the parameters used by the current DirecTV system are based on the FCC filing for that system). In 1984 published the first paper analyzing the impact of various DBS systems designs on profits. In 1985 published the first paper which considered various high-definition television systems then under development and analyzed their performance (e.g., picture quality) versus the cost of the direct-broadcast satellites necessary to transmit such signals in the U.S.